Officials from Track Enterprises have released the first look at the 2016 schedule for Lincoln Speedway.  The company took the reigns for promoting the ¼-mile facility during the offseason.  This year will mark the 13th year of racing at the Logan County Fairgrounds in Lincoln, IL.

At the top of this year’s can’t miss events are the UMP DIRTcar Summernationals and the first ever appearance for the Arctic Cat All Star Sprints.  The Summernationals Hell Tour event will be on Sunday, July 3 and will feature the best in Super Late Model racing along with the Modified Summit Nationals and B-Mods.  Fireworks will cap off the show.

The Arctic Cat All Star Sprints, the popular tour owned by NASCAR star Tony Stewart, will be making one Illinois visit this year.  Fortunately for fans in Central Illinois, the stop happens to be at Lincoln Speedway.  The winged sprint car stars will be on track for a Friday, May 20 show that will also feature UMP Modifieds and the POWRi Division II Midgets. 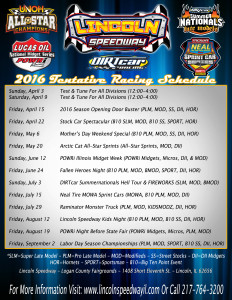 2016 will see racing on a bi-weekly basis, to allow for bigger shows, better car counts, and bigger crowds.  In addition to the Summernationals and All Star Sprints, the MOWA Sprint cars, POWRi Midgets and Micros, Kids Modz, and Big 10 sanctioned races will be held.

The Season Opening Door Buster is set for Friday, April 15 with five divisions of racing on tap.  Regular classes this season include the POWRi Division II Midgets along with the UMP sanctioned Pro Late Models, Modifieds, and Hornets with visits for Street Stocks, Sportsman, and B-Mods.

Preseason events include a car show for Lincoln and Macon Speedways at the Hickory Point Mall in Forsyth, IL from March 18-20.  That will be followed by test and tune dates on Sunday, April 3 and Saturday, April 9.

To stay on top of any schedule updates along with other offseason news, check out the redesigned Lincoln Speedway website at www.lincolnspeedwayil.com.

MOWA Sprint Event At Lincoln Speedway Canceled Due To Rain