305 Sprint Cars Steal The Show In Only Visit

(Lincoln, IL) Racing was fast and furious this past Friday night, May 5 at Lincoln Speedway.  With a packed grandstand full of racefans, taking advantage of Five Buck night at the track,  a great show of 305 Sprint Cars, UMP Pro Late Models, UMP Modifieds, POWRi Lucas Oil DII Midgets presented by Nutech Seed, and UMP Hornets were on the card.

The 305 Sprint Cars, making their only scheduled appearance of the season, put on a stellar show.  With 18 cars pitside, the feature was filled with drivers eager to get into Lincoln victory lane.  The race was wild, starting early in the event, with Nathan Charron and Jarrod Schneiderman putting on a great show up front.  The two were racing hard and swapped the lead on a couple of occasions with Charron getting back out front by the line at each lap’s end.  With five laps to go, a grinding crash occurred coming off of turn four, as Atlanta, IL driver, Travis Howard rode the wall until the car barrel rolled onto the horse track.  Howard quickly climbed from the car and was okay.  Back to green, most thought that Charron and Schneiderman would put on a two-man race for the win.  Ben Wagoner had something to say about that.  One lap after the restart, the Emden, IL driver shot by the top two and raced out front with just a few laps to go.  Wagoner would take his #78 to victory, followed by Schneiderman, Charron, Justin Standridge, and Brian Armitage.

After pulling a favorable redraw frisbee, Kewanee, IL driver Ray Bollinger raced out front early in the UMP Modified feature.  Bollinger, who won the first three features of the 2016 season, came away with a second place finish on opening night this year.  On night #2, Bollinger was not to be denied as he was in cruise control mode, pacing the 1/4-mile at a high rate of speed.  Steve Meyer and Brandon Roberts, who won on opening night, were also strong, moving from row three to second and third by the end of the 20-lapper.  At the checkered, Bollinger was followed by Meyer, Roberts, Travis Shoulders, and Brian Lynn.

The UMP Pro Late Model feature was highly contested and, in turn, caused some flaring tempers.  While battling in the top three, Tommy Sheppard, Jr. and Myles Moos traded paint while swapping positions on a few different occasions.  Eventually, it all came to an end on the backstretch when Sheppard’s car made contact with the back of the Moos car.  That sent Moos’ car careening toward the infield and the Sheppard car into the tire barrier at the middle of the straightaway.  Back to green, Cody Maguire was running a great race at the front of the field, fending off challenges from Roben Huffman, last year’s champion.  Behind them, Guy Taylor, was working his way forward after a tough redraw started him in sixth.  One car at a time, with the help of a little attrition, Taylor was making his way to the front.  As Taylor was racing with Huffman for second, the two cars raced by Maguire to shuffle him back to third.  Taylor went on to claim the victory after clearing Huffman and Maguire.  At the checkered, Brandon Eskew brought home a solid second, while Maguire, Andy Minett, and Shawn Vaughn completed the top five.

In the POWRi Lucas Oil DII Midgets presented by Nutech Seed, 2016 track champion, Tyler Vantoll, took the lead from the get-go and never looked back as Mitchell Davis followed him in second.  Andy Baugh, who started the race in third, finished third.  Dave Baugh and Broc Hunnell completed the top five.

Rounding out the night was the UMP Hornet division feature event.  Adam Webb, the heat race winner, started toward the back of the feature field due to the invert.  That didn’t much matter, though, as Webb quickly raced to the front to pace the field.  Webb came away with the easy win, while Mike Eskew, Bob Sanders, Cook Crawford, and Vernon Carlow finished off the top five. 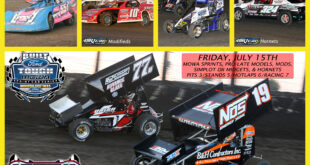