Lincoln Speedway in Lincoln, IL, is preparing for its biggest winged sprint car show, possibly ever, this coming Friday night, May 20.  The date marks the only Illinois visit in 2016 for the Tony Stewart owned Arctic Cat All Star Circuit of Champion sprint cars.  It will be a great night for all racing fans, as the UMP Pro Late Models, UMP Midwest Technical Institute Modifieds, and POWRi/Illini D-II Midgets Presented By Nutech Seed will also be in action. 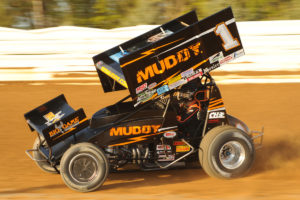 Coming into Friday’s event at Lincoln, veteran open wheel star, Dale Blaney, of Hartford, Ohio leads the standings, claiming wins at Attica Raceway Park and Port Royal Speedway.  Blaney has also taken top fives at Wayne County and Selensgrove with a top ten at Bedford.  Blaney will be one of the favorites, no doubt, at the Lincoln Speedway event.

Chad Kemenah, the current point runner-up, trails Blaney by 26 points early in the season.  Kemenah has been outstanding as well, winning recently at Bedford, while claiming top fives at Attica, Wayne County, and Port Royal.  Kemenah trimmed 8 points off of Blaney’s lead at Lernerville last Friday night.  A 24th at Selinsgrove is what put the deficit where it is now.

The top five in series standings are finished off by Sheldon Haudenschild, Cap Henry, and T.J Michael.  Others in the top ten include Tim Shaffer, Lee Jacobs, Danny Holtgraver, Caleb Helms, and Ryan Smith.  Expected travelers with the series also include Andrew Palker, Kraig Kinser, Caleb Armstrong, Bradley Howard, and Brent Marks, who find themselves in the top 15.

Pits will open next Friday at 3:00, while grandstands will open at 4:00.  The driver meeting for All Star Sprints is scheduled for 5:30, while the local division pill draw will end at 6:00.  Sprint hotlaps are set for 5:45 with qualifying to follow and racing to take the green around 7:00.