Korey Weyant emerged victorious in the 25-lap feature Friday night with the Monster Energy™ Sprint Car Series at the Lincoln Speedway in Lincoln, Illinois. The Springfield, Illinois driver was in Rick Northrop’s #83 Schnee chassis powered by Ford. It was his first winged sprint car win, and Northrop’s first in eleven years, when Dave Feese was the driver.

Jim Moughan Jr. asserted himself by leading from the pole position early in the main event. Utilizing the low side, Moughan kept the Moughan Builders #1m up front for the first half of the race. Weyant was moving forward from his sixth starting spot on the high side of the ¼-mile bullring.

On lap 13, Weyant made his winning pass relegating Moughan to second. Moughan followed Weyant on top, making a couple of bids to retake the lead, but could not get it done, and settled for second. Robbie Standridge found some rubber on the low side late in the feature, and charged from back in the pack to finish third with a last lap pass of Jordan Goldesberry.

“We had a good fight with Bubba Altig and (Jordan) Goldesberry for second,” said Weyant. “I finally got by them and set sail for Jimmy. I happened to throw the car in too hard in one and two while I was chasing him, and almost spun out. It shot me down the track, and I felt rubber a car-width off the cushion. Jimmy wasn’t going to leave the bottom, and I caught the rubber. When I passed him, it was with enough that he couldn’t race me back for it. He showed me his nose the last two laps, but I was able to hold him off.” Goldesberry finished fourth ahead of Bubba Altig, campaigning a sprint car for the first time in years. 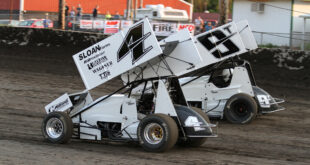 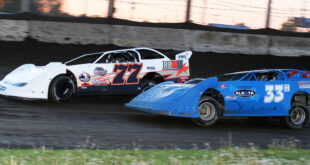