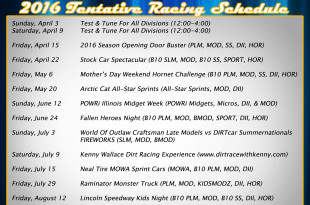 Season Opening Weekend Just A Couple Weeks Away Drivers in central Illinois are looking forward to the start of the 2016-racing season and the next two weekends will be used to fine tune their machines at Macon and Lincoln Speedways, part of the Track Enterprises conglomerate.  Four different practice dates are set between the two tracks.                 At Macon Speedway, drivers will be on track on Saturday, April 2 and Sunday, April 10.  The Lincoln Speedway dates are scheduled for Sunday, April 3 and Saturday, April 9.  Drivers in Super Late Models, Pro Late Models, Modifieds, B-Mods, Sportsman, Street Stocks, Hornets, Midgets, Micros, and Sprint Cars are welcome to attend. Each of the four days will see pits opening at 11:00 AM with on-track action taking place between 12:00-4:00.  Pit admission for the test and tune days is $20 for adults and $10 for children 11 and under.  Grandstand admission … 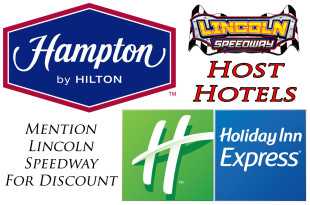 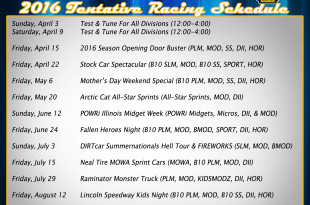