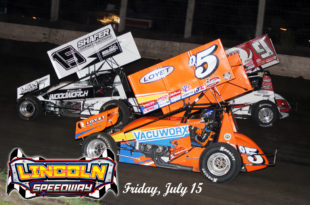 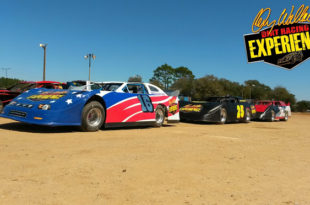 The Kenny Wallace Dirt Racing Experience is coming to Lincoln IL Speedway this Saturday, July 9.  This event will give race fans, crew members, drivers, and more the opportunity to ride in or drive a Modified, Late Model, and/or Sprint car around Lincoln Speedway.  The event is scheduled to start at 12:00 Noon. Don’t forget to use the Promo/Discount Codes of “SAVE50” or “Dirt99”. To register or get more information on this fun and rare opportunity, visit www.dirtracewithkenny.com. 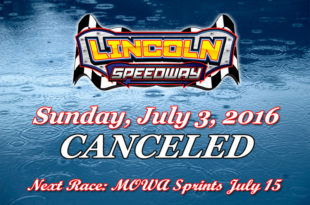 A New Date And Event Is Coming In August Mother Nature picked an untimely day for a 100% chance of rain with potential flooding, when it comes to Central Illinois.  Unfortunately for race fans, it was Sunday, July 3, when the first ever visit of the World Of Outlaws Craftsman Late Models were set to visit Lincoln Speedway in a combination event with the UMP Summer Nationals Hell Tour.  Due to the heavy rains, the event has been canceled. The event was a first of a kind, with the Summer Nationals Late Models and World Of Outlaw Craftsman Late Models scheduled to race together in the Graue Chevrolet Showdown.  A Saturday night event with the two sanctions in Pevely, MO was also canceled due to rain.  Unfortunately, the weekend just wasn’t meant to be. That said, Lincoln Speedway officials are looking forward to the UMP Summer National gang coming back …

Dealership Also Having Holiday Race Themed Sale   This coming Sunday, July 3, Lincoln IL Speedway is having its biggest event ever, featuring the World Of Outlaws Craftsman Late Models and the Summer National Hell Tour Late Models in the same event. Graue Chevrolet-Buick-Cadillac-Lincoln of Lincoln, IL, has also joined in on the big weekend by offering huge deals for their two day sale at the dealership, leading up to the big race. Graue Chevrolet is the presenting sponsor of the Lincoln Speedway event.   Leading up to the Sunday evening event, Graue Chevrolet-Buick-Cadillac-Lincoln will have a special sale, live remote, ticket giveaways, and a race car on display. The special sale runs on Friday from 8:00 AM to 7:00 PM and picks back up on Saturday morning at 8:00 AM and runs through 3:00 PM. WFMB 104.5 FM out of Springfield will be live on Friday from 4:00-6:00 PM. … 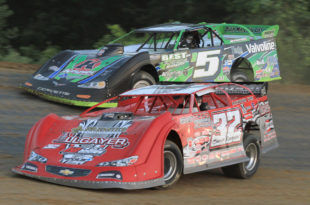 This Weekend’s Combined Shows Are The First In Series’ History For the first time in series’ history, the World of Outlaws Craftsman Late Model Series will be facing off against the Summer Nationals Hell Tour competitors in a pair of combined showdowns this coming weekend.  The first race takes place in Pevely, MO on Saturday, July 2, while the second one comes to Central Illinois’ Lincoln Speedway on Sunday, July 3, paying $8,000 to win.  The show will be the biggest in Lincoln Speedway’s 13-year history.                 So far, nine of the eleven events have been completed on this year’s Summer Nationals Hell Tour.  Oakwood, IL driver, Bobby Pierce, the 2015 Summer Nationals Tour Champion, is on absolute fire, winning five out of the nine events and leading the standings over Mike Marlar by nearly 100 markers.  Billy Moyer has won in two of his seven starts, while Dennis Erb, …

World Of Outlaws & Summernationals Up Next Intrepid Fallen Heroes Night, presented by Charron’s Auto Repair, had a little bit of everything for the fans this past Friday, June 24 at Lincoln IL Speedway.  A color guard, bagpipes, and rendition of the national anthem led into the six division show.  American flags handed to those in attendance and t-shirts flying into the stands during the night also helped honor the fallen heroes of our military.  The event was the final one before the huge World Of Outlaw vs. Summernational show coming up on Sunday, July 3. The headline show of the night was the Midwest Big Ten Series Pro Late Models.  A solid field of drivers were in attendance with this being the first of two nights this weekend for the series.  After the frisbee redraw, Brian Lynn and Jake Little started on the front row for the 20-lap event.  …