Season Openers Now Up Next                 (Macon, IL) For the second straight weekend, unseasonable weather has caused cancelations of test-and-tune events at Central Illinois race tracks.  Macon Speedway in Macon, IL and Lincoln Speedway, in Lincoln, IL have both called of their practice sessions scheduled for this Saturday and Sunday, April 7/8 due to forecasted highs in the 30’s and a chance of snow.  Officials, fans, drivers, and teams are hopeful that the weather breaks for next weekend’s season openers.                 At Macon Speedway, the 2018 season opener will be the 73rd for the 1/5-mile oval at the track.  It’s set for Saturday, April 14 with six divisions of racing on the schedule.  Decatur Building Trades Pro Late Models, Billingsley Elite Wash Modifieds, B-Mods, Street Stocks, Hornets, and Beach House Micros presented by Bailey Chassis are on tap.  Pit gates will open at 3:00, grandstands at 5:00, hotlaps at 6:00, an on-track autograph session is at 6:40, and … 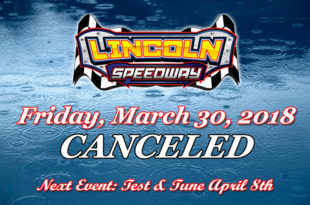 Drivers Looking Ahead To Final Test Weekend April 7/8                 (Macon, IL) The start of pre-season on track activity will have to wait at least one more week for participants at Lincoln Speedway and Macon Speedway in Central Illinois.  The two tracks, running under the Track Enterprises banner, have postponed this upcoming weekend’s test-and-tunes due to saturated grounds and the forecast for more unfavorable weather.                 Test-and-tune action is still scheduled for next weekend, Saturday, April 7/8 at the tracks.  The Saturday, April 7 practice will be at Macon Speedway from 12:00-4:00, while Lincoln Speedway will hold an open test session on Sunday, April 8 from 12:00-4:00.  Pit admission each day is $20 for adults and $10 for kids 11 and under.                  All divisions that compete at one point or another during the season are welcome to participate in the testing sessions.  Track Enterprises Chief Registrar, Chuck Weigel, will … 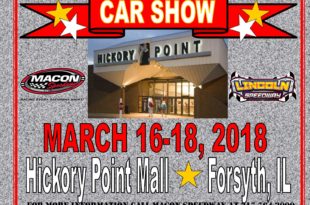 March 16-18 Car Show To Kickstart Season                 (Macon, IL 03-07-18) Officials from Macon Speedway as well as Hickory Point Mall in Forsyth, IL are pleased to announce the return of the season preview car show.  Formerly an annual event, the show returns for a third season in-a-row, after a long hiatus.  The event is scheduled for March 16-18.                 The car show is open to any regular competitors that race at Macon Speedway or Lincoln Speedway, as well as those from traveling series that compete at either of the tracks.  The show will be three days long with cars entering on Thursday, March 15 and exiting on Sunday, March 18 when Hickory Point Mall closes for business each of the two days.                 The show is a great benefit to those who like to display their newly prepared rides before receiving battle scars from on track action.  It’s also … 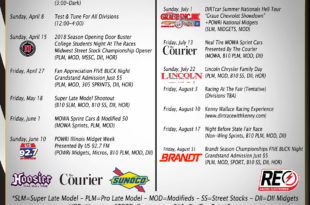 The first look at the 2018 tentative Lincoln Speedway schedule has been posted.  A few minor tweaks will be expected before the final version is released at the Hickory Point Mall Car Show in March.

A Look Back At The 2017 Lincoln Speedway Season 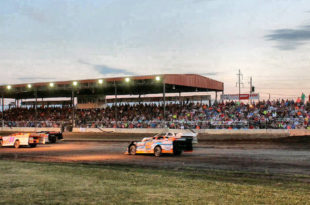 4 Champions To Be Crowned At January Banquet                 (Lincoln, IL) Lincoln Speedway, located in Lincoln, IL, had a highly successful 2017 season come to an end on September 1.  The track, in its 14th season, completed 11 out of 12 scheduled events with great weather, much improved crowds, and top notch racing on the 1/4-mile.  From Sprint cars to Hornets to a Summer Nationals event that set the record for biggest crowd at the track, the track had great racing from start to finish this year.  This year’s top point finishers will be honored during the January 20 banquet.                 The UMP Pro Late Models competed in nine out of the eleven events this season at the track and Springfield, IL’s Jake Little was the man to beat.  Little started the season with three finishes of 2nd and one 12th place finish but starting with the June 23 show, … 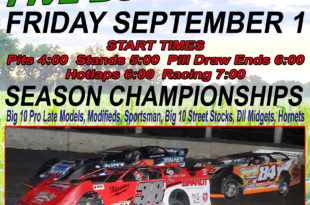 IT IS Brandt Season Championship/Five Buck Night Race Day at Lincoln Speedway! The final event of the 2017 racing season at Lincoln Speedway is upon us. Brandt will present the Season Championship night with $5 grandstand admission. That’s right.. just FIVE BUCKS to see six divisions of racing action the final night of the season! COME HUNGRY TO THE TRACK! In addition to the $5 grandstand admission special tonight, the concession stands will have a $5 special that includes a sandwich, chips, and a drink. Sandwich choices with the special include burgers, polish sausage, or hot dogs. It’s going to be a great night to bring the whole family to the track and it’s your last chance to get out to Lincoln Speedway this season. Friday, September 1 Brandt Consolidated Season Championship Night Divisions: DIRTcar UMP Modifieds Midwest Big Ten Series UMP Pro Crate Late Models UMP Sportsman Midwest Big …