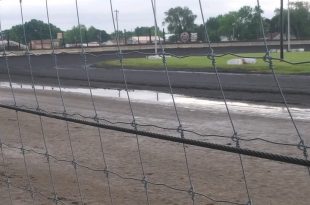 (Lincoln, IL) Saturated grounds from several days of rain have forced the cancellation of the Sunday, June 16 event at Lincoln Speedway, in Lincoln, IL.  On tap were the POWRi Lucas Oil National Midgets in addition to Micros, Pro Late Models, Modifieds, and the Nutech Seed DII Midgets. Heavy rains throughout the day on Saturday, in addition to another wave of overnight rain into Sunday proved to be too much for the ¼-mile facility.  Pit parking in addition to the horse track that surrounds the ¼-mile track are overly saturated, forcing the cancellation. Up next for Lincoln Speedway will be the show of the year as the Summer Nationals comes to town on Sunday, June 30.  In addition to the Graue Chevrolet Showdown for the Super Late Models, the Summit Modified Nationals, and the POWRi National Midgets will be there. For more information, visit the website at lincolnspeedwayil.com. 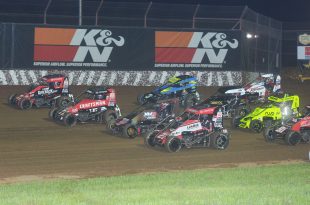 (Macon, IL) – The star power of POWRi Illinois Speedweek is evident each and every year with headliners swarming from around the world to the “Illini State” for a thrilling five-night stretch. This week’s sixth annual running is no different, featuring the trio of Logan Seavey, Tanner Thorson, and Michael Pickens all chasing a second Speedweek championship, among countless other contenders in the hunt.  The Midgets are heading to Macon Speedway Saturday and Lincoln Speedway Sunday, to finish out their week.  A number of other classes will also be in action. For Seavey, the Sutter, California native looks to re-write the record books with the potential to become the first back-to-back champion in Illinois Speedweek history. The 2017 POWRi Lucas Oil National Midget League champion, Seavey used finishes of fifth, third and first one year ago when he topped the 2018 edition of Speedweek. Fresh off a coveted Indiana Midget …

(Lincoln, IL) The DIRTcar Hornets were the headlining division this past Friday night, June 7, as the 4th annual Ed Cain Trucking Hornet Challenge was on the card.  20+ of the best Hornet drivers in the country were on hand in addition to strong fields of Modifieds, Pro Lates, Pro Modifieds, and the Nutech Seed DII Midgets. Clinton, IL driver, Eric Vanapeldoorn, one of the favorites coming into Friday night’s event, picked up where he left off at last year’s Ed Cain Trucking Hornet Challenge, out front.  After winning his heat race, Vanapeldoorn claimed the six car dash before intermission.  That slated him on the pole of the 25-lap feature and the orange #77 continued to be too tough to tame for the competition.  The veteran driver raced out front early and never looked back to claim the win.  Wilmington, IL racer, Jake Momper, was pretty fast, keeping the #E77 … 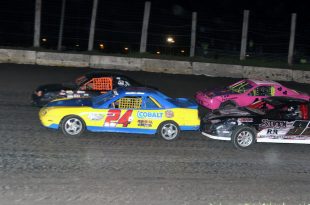 (Lincoln, IL) After a couple of weeks off, Lincoln Speedway, in Lincoln, IL, is set for a return to racing this Friday, June 7.  Five divisions of racing action are on tap, including a rare visit from the DIRTcar Pro Mod division as well as a $1,000 to win special for the Hornet class. Headlining Friday’s action is the Ed Cain Trucking $1,000 to win Hornet Challenge.  The class, which usually races for about $100 to win, will have plenty of extra money on the line on Friday night.  The event, in its fourth season, runs on Friday night at Lincoln before heading to Macon Speedway on Saturday night.  Over the first three years, the events have averaged fields in the mid to upper 20’s.  $40 fast time bonuses as well as bonus money for the top out of state finishers are on the line. Making a rare appearance Friday …

(Lincoln, IL) A talented field of Midwest Big Ten Super Late Model drivers gathered at Lincoln Speedway, in Lincoln, IL this past Friday, May 17 for their opening race of the 2019 season.  For Lincoln Speedway, it was the fourth race of the season and the first of two this year which will feature the high powered racecars. 2018 Summer Nationals champion, Brian Shirley, of Chatham, IL, was the favorite coming into the night.  He didn’t disappoint in qualifying, setting quick time over local favorite Myles Moos, former Big Ten champion Brian Diveley, Ryan Unzicker, and Mike Chasteen, Jr.  Heat race action saw Shirley and Unzicker claim the wins. When it came time for the feature, Shirley and Unzicker led the field to green.  Shirley raced out, while Unzicker tried to make a go of it in the outside lane.  The car to watch, though, was one that pulled in …