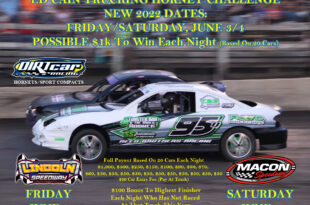 Possible $1,000 To Win Each Night (Macon, IL) This coming weekend, Lincoln Speedway, Friday, June 3, and Macon Speedway, Saturday, June 4, will be hosting another big weekend for DIRTcar Hornets, as the annual Ed Cain Trucking Hornet Challenge is held. The unprecedented weekend of racing, camping, partying, and all out fun for Hornet competitors will pay a possible $1,000 to win each night, based on 20-car feature fields. Each feature will pay $1,000 to win and $50 to start.  On top of that, additional $100 bonuses are in place for the highest finishing driver who hasn’t competed at each track this year, courtesy of R33D Racecars. The events will see heat races set up by draw, with passing points used to lock drivers into the feature field.  A semi will be held to give remaining drivers a last chance to make the show. Car entry fee each night is $30 and will be …

(Lincoln, IL) Just one week removed from a record setting night, Lincoln Speedway is ready to go again this Friday, May 20 for a full six division program. Vintage Racing of Illinois will be making their only visit to the track this season and will be joined by five other classes of racing. Vintage Racing of Illinois has made several appearances at Lincoln Speedway, always putting on an exciting show with several drivers going for the win. The classic racecars bring back racing memories from years gone by. The series competes at multiple racetracks across the state. Jose Parga, last year’s Lincoln Speedway point champion, leads this year’s Pro Late Model points by just four over 2020 champion, Brandon Eskew. Neither driver has found victory lane but both have been battling toward the front of the field. Blaise Baker, Rockett Bennett, and Cody Maguire round out the top five in … 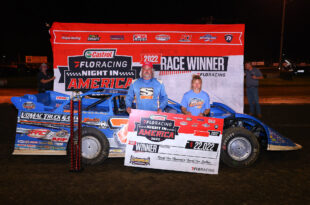 Illinois Speedweek Action Continues on Friday and Saturday at Farmer City and Fairbury Speedway LINCOLN, Ill. (May 12, 2022) — Dennis Erb Jr. appeared well on his way to stinking up Thursday’s Castrol® FloRacing Night in America feature at Lincoln Speedway. But Brandon Sheppard made sure fans got their money’s worth at the quarter-mile fairgrounds oval hosting the richest event in track history. Furiously cutting Erb’s three-second lead with 10 laps remaining to mere tenths of a second in the final laps, Sheppard’s Hail Mary charge pushed Erb to the limit in a thrilling finish that saw Erb hang on by a half-second to secure a $22,022 paycheck for the second-richest victory of his career. “We were just trying to finish it off there,” the Carpentersville, Ill., winner said in victory lane. “We did what we could,” the runner-up from New Berlin, Ill., said a moment later. Sheppard nearly pulled alongside Erb exiting … 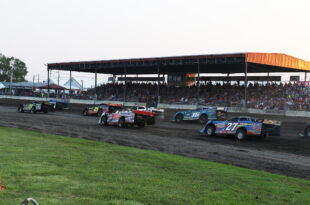 Thursday Night Event To Pay $22,022 To Win (Lincoln, IL) Super Late Model drivers from at least 18 different states and one from Australia are set to converge on Lincoln Speedway this coming Thursday, May 12, to race in the biggest event in the track’s 19-year history. The event, which now has 50 different names on the expected entry list, will pay $22,022 to win, shattering the record for the highest paying event ever at the track. The DIRTcar Modified class will also race for a strong payout of $2,000 to win. The inaugural FloRacing Illinois Speedweek kicks off on Wednesday night at Spoon River Speedway before heading to Lincoln Speedway on Thursday night, followed by Farmer City and Fairbury to end the week. $89,000+ is on the line in first place money, while the total payout for the week is $248,000. The Spoon River Speedway and Lincoln Speedway events … 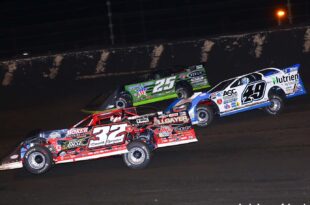 Over $248,000 in Prize Money on the Line; $22,500 Total Points Fund AUSTIN, Texas (May 4, 2022) — The inaugural FloRacing Illinois Speedweek kicks off one week from today. The four-race run includes four events at four tracks in four days, spanning May 11-14. The inaugural miniseries will pit national, regional, and local Dirt Late Model standouts against one another on the legendary Illinois prairie dirt as they compete for over $89,000 in first-place money from a total payout of over $248,000. Additionally, the miniseries champion will bank $10,000 from a total Top-5 point payout of $22,500. The four-race swing begins with a pair of Castrol® FloRacing Night in America events on Wednesday and Thursday, May 11-12. Each event pays $22,022 to win and $1,000 to start. Spoon River Speedway (Banner, Ill.) hosts the tour for the first time ever on Wednesday, May 11. Joining the night’s action will be DIRTcar …