Some of the best in dirt car racing converged on Lincoln IL Speedway on Thursday, August 25, for the Summer Nationals makeup of the Graue Chevrolet Showdown for a strong field of 32 Late Models in addition to the Summit National Modifieds, and B-Mods. The headline show of the night was the Graue Chevrolet Showdown for the UMP and MARS Super Late Models.  Ryan Unzicker and Brent Larson started up front with Summer Nationals frontrunners, Bobby Pierce and Jason Feger.  Action got hot and heavy right away with Unzicker leading lap one before Larson was able to scoot by.  Larson remained out front for the first four laps before Pierce used a three wide pass to head to the front.  The Oakwood, IL driver set the pace for the next eleven laps before Feger flew by.  Feger went on to set a blistering pace for a major portion of the … 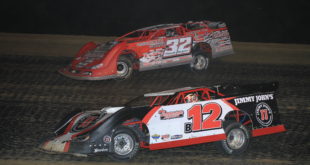 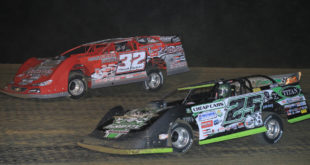 $5,000 To Win Summer National Makeup To Bring Top Stars The top stars of dirt Late Model racing will be heading to the midwest this week as plenty of big shows are lined up.  It all starts on Thursday, August 25 at Lincoln IL Speedway with a $5,000 to win event, which is a makeup for the Summer Nationals rainout on July 3.  The Graue Chevrolet Showdown for Late Models will be accompanied by UMP Modifieds for $1,000 to win plus the UMP B-Mods.                Leading the list of favorites to claim the Lincoln trophy would be this year’s dominant driver on the Summer Nationals tour, Bobby Pierce.  The young driver from Oakwood, IL has been so good all summer long and was especially strong at the central Illinois events, claiming the Herald & Review 100 Summer Nationals race at Macon Speedway and the Lucas Oil Dirt Late Model event …

The UMP Summer National makeup is this coming Thursday, August 25 at Lincoln IL Speedway.  In addition, the MARS Super Late Models will join them for the $5,000 to win Graue Chevrolet Showdown.  The UMP Modifieds will be running for $1,000 to win and the B-Mods will also be in action. The event is the rescheduled event from July 3, that was postponed due to rain. Pits 3:00 Stands 4:00 Hotlaps 6:00 Racing 7:00 General Admission $25 Kids 11 & Under $5 Hotels(Ask For Lincoln Speedway Rate) Hampton Inn Lincoln Holiday Inn Express Lincoln

The Dauminator Denies Thorson, “Parks It” At Lincoln Speedway 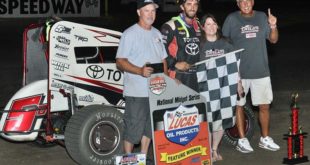 Lincoln, IL – Current leader of the POWRi Lucas Oil National Midget Series points standings, Zach Daum, rallied back against Tanner Thorson at Lincoln Speedway to collect career victory number 17. Daum started on the outside front row and vaulted to an early lead over the pair of Keith Kunz Motorsports entries, Tanner Thorson and Carson Macedo. Daum held a healthy lead over Thorson until lap 13 when racing was halted for Ryan Robinson who flipped entering turn one. Robinson was alright and able to continue after a quick visit to the work area. Returning to green flag racing, Thorson started to pressure Daum, only to have the action cut short as the red flag appeared for Brayton Lynch who flipped entering turn one and landed on all fours. Lynch would be alright, but damage sustained to his machine would end his night. Just to the half way point, Thorson …

IT IS RACE DAY at Lincoln Speedway! 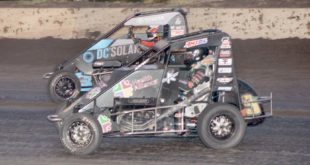