August 12 Event At Lincoln Speedway Canceled Due To Weather 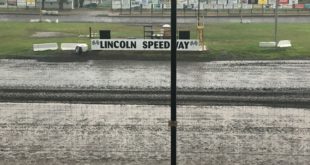 Weather Forces August 12 Cancellation At Lincoln IL Speedway Lincoln IL Speedway officials waited and waited, in hopes of running the Friday, August 12 program at the ¼-mile racetrack.  Despite dry conditions all afternoon, everyone in Lincoln, IL could see lightning off to the north and west for about three hours as rain slowly approached.  Eventually, rainfall hit the track just before 5:30, forcing the cancellation of the event. Scheduled to be on hand were the Midwest Big Ten Pro Late Models and Street Stocks, in addition to the Modifieds, Hornets, and the POWRi/Illini D-II Midgets presented by Nutech Seed. The event was billed as Fan Appreciation and Kids Night, featuring numerous $5 vouchers passed out in the area for fans to take in a night of racing for just $5.  Due to the rainout, those vouchers will now be good for $2 off on the August 19 POWRi night … 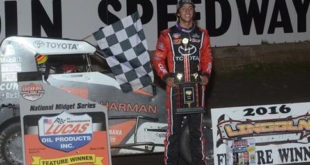 Lincoln, IL– Tanner Thorson of Minden, Nevada recovered from a late race flat tire on a rubber-down Lincoln Speedway to win the Illinois SPEED Week finale with the POWRi Lucas Oil National Midget Series. By virtue of the win, Thorson also secured the POWRi Illinois SPEED Week championship. The 30 lap main was action packed right from the get go, as the previous night’s winner Carson Macedo got upside down on the opening lap in turn three. Macedo would be done for the night and racing would resume with a complete restart, led by Zach Daum. Daum narrowly edged Darren Hagen for the lead of lap one, but entering turn one on lap two, Hagen would spin around collecting Andrew Felker, Ryan Robinson, and Dayne Kingshott. Enduring one more red involving Spencer Bayston off turn four, the result of a slide job gone wrong, Daum would continue to lead the … 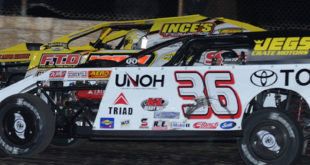 (Wallace/Bollinger Photo Courtesy Of Rocky Ragusa) Modifieds Part Of All Star Sprint Show Friday Night Lincoln IL Speedway is the site for the Tony Stewart owned Arctic Cat All Star Circuit of Champions on Friday, May 20.  Fans, though, will not be overlooking the highly popular Midwest Technical Institute UMP Modified division, which will be racing as well.  Many will be watching to see if Kewanee, IL driver, Ray Bollinger, can keep his unbeaten streak alive.  Others will have their eyes glued to NASCAR personality, Kenny Wallace, as he tries to end Bollinger’s streak at three. Bollinger, a veteran driver who pilots a bright yellow #77, has had plenty of Lincoln Speedway success in the past but his start this year is unmatched.  Three Modified races and three Modified victories have pushed Bollinger into a 14 point lead over many time track champion, Brian Lynn.  Lynn, from Mason City, IL, … 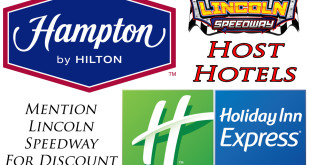 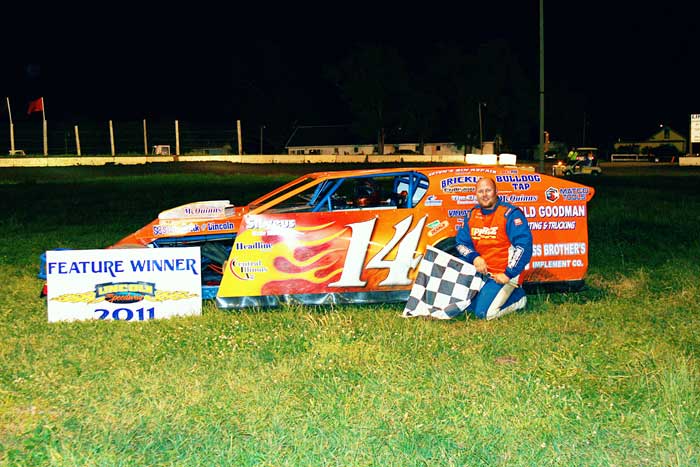 We have concluded our 2011 season and would like to congratulate our track champions: Brian Lynn (Modifieds), Nick Bauman (Crate Late Models), Todd Bates (E-Mods), Chuck Barnes Jr (Street Stocks), and Damin Jones (Wild Things). Thanks to everyone who came out to the speedway this season. We’ll see you all at the banquet on November 12th. Originally posted on www.lincolnspeedway.org by dotcomguy