Over the weekend, we were thrilled to announce that we are the home of the 2020 DIRTcar Fall Nationals, October 1-3, 2020. This is a huge event for Lincoln Speedway as well as all the surrounding community!   We know our drivers are pumped up about it and we feel that Lincoln Speedway is a great place for it. From Hornets all the way up to Super Late Models, Lincoln Speedway is the perfect size track to fit all classes. Not too big, not too small, just right and centrally located for all involved.   We are still working on finalizing the details as far as daily schedules, purses, etc. Those should be coming out soon.   The full 2020 schedule for Lincoln Speedway is also out. While it’s still tentative and subject to change, we don’t foresee any major changes to dates, etc.

(Macon, IL) Racing officials at Macon Speedway as well as Lincoln Speedway have announced important off-season dates as well as the season opening dates for each track.   For Lincoln Speedway, 2020 will be the 17th season of racing at the Logan County Fairground track.  At Macon Speedway, 2020 will be an extra special year, as it’s the 75th season of racing.  Season opening weekend will be Friday and Saturday, April 10-11. The awards banquet, celebrating champions and other top drivers from 2019, will be held on Saturday, February 1, 2020 at the Decatur Conference Center and Hotel in Decatur, IL.  Full details and ticket availability will be released in the coming weeks. Other dates, including the four pre-season test and tunes, the racecar show at the Hickory Point Mall, and the Midwest Speed Expo are also set.  The full schedules for the 2020 racing seasons at Macon and Lincoln …

(Lincoln, IL) The time has come for the 2019 Brandt Season Finale at Lincoln Speedway, in Lincoln, IL and fans will be treated to a great night of entertainment for just $5. In addition to the very affordable ticket prices Friday, August 30, $5 food/drink combos will be sold in the concession stand.  Six divisions of racing are set to go green with season and point championship to be decided. Headlining the night’s action will be the DIRTcar Pro Late Models. In what once was a tight point battle at the top, Springfield, IL’s Jake Little now has a 52 point lead entering the final night. Little will lock up the championship by starting the feature. Denny Woodworth is second in points, while Roben Huffman, Cody Maguire, and Colby Sheppard complete the top five. Last year, the DIRTcar Modified point battle went right down to the wire as the father-son …

IT IS RACEDAY AT LINCOLN SPEEDWAY… 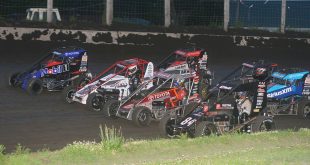 Five Division Show To Begin Action Packed Racing Weekend (Lincoln, IL) For the second time this season, the POWRi Lucas Oil National Midget League is set to take the track at Lincoln Speedway, in Lincoln, IL. The quick and nimble racers were also part of the Summer Nationals event on June 30, when NASCAR star, Christopher Bell, took home the trophy.  Friday’s event will also feature four other action packed divisions of racing, which will make for a great start to an action packed race weekend in Central Illinois. For the POWRi Lucas Oil National Midget League, Jesse Colwell, of Red Bluff, CA, leads the standings in the Keith Kunz-Curb Agajanian Motorsports/JBL Audio #71. Colwell has claimed one win with nine top five finishes and fifteen top tens.  His lead is 330 over Zach Daum.  Jake Neuman, Ace McCarthy, and Holley Hollan round out the top five in this year’s … 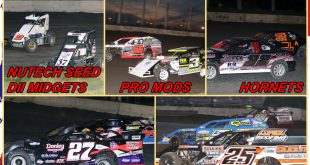 Bonus Lap Money On The Line For Five Classes (Lincoln, IL) Friday night, August 9, will be action packed at Lincoln Speedway, as seven different classes of racing will be on track at the All American Night Of Speed.  Headlining the show will be the 305 Sprint Cars and Vintage Racing of Illinois.  A number of the divisions will be racing for lap leader bonus money as well as big trophies, carried over from Terry Young’s Central Illinois Motorsports Nostalgia Reunion race that was postponed on July 21. For the 305 Sprint Cars, Friday night will be their second event at the track this season.  At the April 26 event, Lincoln, IL’s own, Max Pozsgai claimed the feature victory.  When the cars returned on July 21, 16 drivers were pitside for the event, a strong turnout for the division.  Unfortunately, rainfall caused a cancelation and reschedule.  Pozsgai will be the …